The largest pumping hydroelectric power station in Europe, that of La Muela II, in the Cortes de Pallàs reservoir. It is the most important hydroelectric exploitation of the Iberian Peninsula.

It has taken 7 years to build and in which about 350 million euros have been invested.

It is located on the right bank of the Júcar river. For its construction it was needed to open a cave in which the Cathedral of Valencia would fit. There, four turbines have been installed that produce electricity, taking advantage of the 500-meter drop. This is located between the artificial deposit of La Muela and the Cortes de Pallás reservoir. To make the water fall possible, a tunnel 800 meters long and 45 degrees inclined has been drilled inside the mountain. The turbines, in addition, are reversible to pump water from the reservoir to the artificial reservoir.

Ø 1200 mm ducts with RAMI-SYSTEM® flange rings have been the products that have been used, looking for technicians, reliability, safety and high quality in all infrastructure components. 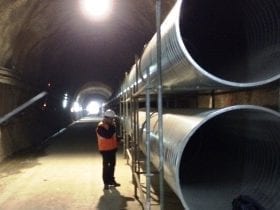